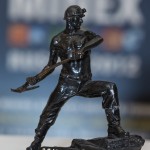 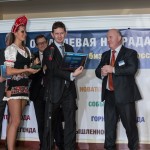 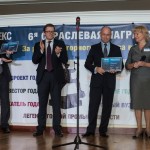 The 6th MINEX “Russian Mining Excellence” Awards Committee is pleased to present nominations and winners of the 2012 awards.

The annual “Russian Mining Excellence Award” was established by the MINEX Russia Forum in 2007. The purpose of the award is to contribute to the competitive spirit and promote best achievements in the Russian mining industry. The award has become an instant success offering an unbiased and independent platform for day-lighting success stories and awarding Russian and International companies and individuals for their outstanding achievements in improving mining industry standards and practices in Russia.

Decisions on the award winners are based on the results of public online voting and opinion provided by the independent experts, participating in the Awards Committee. The committee members are elected for two years.

NOMINATION “PROSPECTOR OF THE YEAR”

For successful exploration and evaluation at Taborninskoye ore field that resulted in discovery of a significant gold deposit Gross. The C1 + C2 reserves of the deposit amounting to 22.3 tons were audited and confirmed by GKZ and were included in the State Balance in 2012. The exploration works identified significant potential of the deposit preliminary estimated to exceed 100 tons.

NOMINATION “PROJECT OF THE YEAR”

For successful development of a large apatite-nephelinic mine and a processing factory at Oleniy Ruchey and Partomchorr, Murmansk Region. The commissioning of the mine will foster growth of apatite concentrate production in Russia.

NOMINATION “INVESTOR OF THE YEAR”

NOMINATION “MINING UNIVERSITY OF THE YEAR”

Winner selected by the Awards Committee.

NOMINATION “INNOVATOR OF THE YEAR”

For successful development and adoption of the first system in CIS for managing and dispatching underground mining works. The system covers a number of aspects from mine rock movement and grade control to monitoring equipment status. The system allows to consolidate all necessary information on mining work and centralise control over hazardous mining conditions and labour safety.

Doctor of Technical Sciences, professor, laureate of Lenin and State Awards, Honoured Scientist of the RSFSR, Honoured Geologist Russia, honorary doctorates from a number of domestic and foreign universities.

NOMINATION “EVENT OF THE YEAR”

EVRAZ Holding is awarded in the Category “Event of the Year” for its Premium Listing and joining the FTSE 100 Index of the London Stock Exchange on 7 December 2011. EVRAZ became the only steel company to have been included in the FTSE100 Index thereby providing the investors with an alternative to pure mining stocks. The inclusion in the index together with the admission to the Main Market of the London Stock Exchange are marks of recognition by the capital markets of the strength and diversity of its assets, the quality of management and the prospects of the company’s business.

Polymetal International plc is awarded in the Category “Event of the Year” for its Premium Listing and joining the FTSE 100 Index of the London Stock Exchange in 19 December 2011. The listing was organised against the background of volatile markets and coolness towards mining companies with links to the former Soviet Union. Polymetal’s Premium Listing along with the inclusion into the UK market’s most prestigious index is an endorsement by the UK and international financial markets of the company’s excellent corporate governance and increased liquidity of its stock, in addition to world class portfolio of assets coupled with significant growth opportunities and a strong management team.

Applications are accepted from companies and individual for the nomination in the following categories:

Category 1. Prospector of the Year

Description: For achievements in exploration

Procedure for nomination: Self- nomination, nomination by the third party, and / or members of the Awards Committee

Category 2. Project of the Year

Description: For the successful implementation of significant for Russia’s Mining Industry project

Evaluation criteria: Successful (large-scale and effective) development of a project in the mining sector during the period between two MINEX Russia forums. Creation of a World-scale Mining project mining in Russia.

Procedure for nomination: Self- nomination, nomination by the third party, and / or by members of the Awards Committee.

Category 3. Investor of the Year

Description: For the successful execution of significant investment project(s) in the Russian mining sector.

Evaluation criteria: Attracting significant volume of investments to a mining project / Successful organisation of funding for the development of large-scale project at an early stage and / or in circumstances that make attracting financial resources difficult. When assessing, the total investment in the mining sector that was made in the period between two MINEX Russia Forums will be taken into consideration.

Procedure for nomination: Self- nomination, nomination by the third party, and / or by members of the Awards Committee.

Category 4. Mining University of the Year

Description: For contribution to the development of higher mining education

Evaluation Criteria: Nominees are preselected by the winners of the previous MINEX Russia award (2011) in the following categories: Prospector of the Year/ Project of the Year / Investor of the Year. If no suggestions were received from the winners, The MINEX Awards Committee can propose nominees.

Category 5. Innovator of the Year

Description: For contributions to the development and application of new technologies

Nominee: A company or organisation

Evaluation criteria: The development and application of new concepts, technologies and / or innovative approaches that will significantly increase the productivity and the level of profitability in the mining sector and that can be replicated in other mining enterprises.

Category 6. Responsible Miner of the Year

Description: For contribution to the health and safety, increasing environmental safety and responsibility in the mining business.

Nominee: A company or organisation

Evaluation criteria: Design and implementation of activities that contributed to a substantial improvement of standards in the areas of health and safety in mining and mineral exploration, environmental and industrial safety.

Description: For a significant personal contribution to the development of the Russia mining industry

Evaluation criteria: Exceptional and recognised personal contribution to the development of mining and geology in Russia / CIS (for example, led the company to success, introduced advanced technology, has achieved a significant increase in the effectiveness of the mining sites)
The procedure for nomination: Nomination by members of Awards Committee

Category 8. Event of the year

Description: The most significant event of the year in the Russian mining industry

Nominee: Company, organization or a person

Evaluation Criteria: The most significant event in the industry that took place in the period between two MINEX Russia Forums and that had significant and positive effect on the mining and mineral exploration in Russia / CIS.

[Comment concerning procedure for the selection of nominees for the category 8 "Event of the Year":
For the selection of the nominees in addition to applications for nominations submitted directly to this category, members of Awards Committee will also consider the applications submitted in the categories 1, 2, 3, 5 and 6, provided that they meet the assessment criteria in the category 8 "Event of the Year" .]

How to submit application
for the MINEX Russia 2012 Awards Nomination

NB. To maintain the high professional level of the awards The MINEX Awards Committee reserves the right to accept or reject applications which do not meet the Awards criteria.

Information about previous nominations and winners can be found at MINEX FORUM website.